We have discussed server virtualization in Will Virtualization Cost More Than A Standard Network Installation?, Virtualization And Small Business Benefits - Dollars And Sense and other posts.  Small business owners and leaders often ask how all of this can be done on one server.  How do they rely on one server for their entire business.  Let's address this in a couple of parts:

When one is not familiar with the notion of collapsing physical servers into logical instances, it can seem, at first glance, that there is increased risk.  In fact, the opposite is true - it is simply a matter of finding the right balance between cost and time to recover.

How long would it take you to recover from server failures in your environment?

Five Things You Must Know When Virtualizing 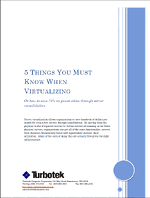 Our white paper will teach you
5 key things to consider when virtualizing!

Download the free white paper to learn how to
make painful, day long server recoveries
a thing of the past!