Difference Between NAS and SAN - 3 Considerations

The difference between NAS and SAN for small business owners may be described in 3 key areas below. 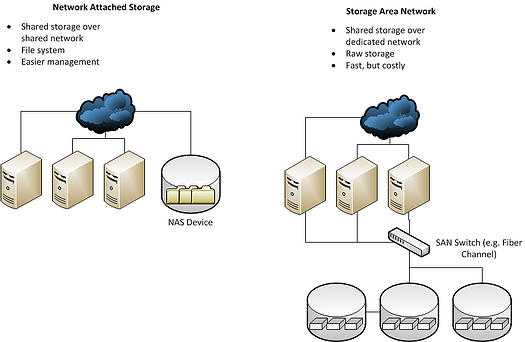 The world of information infrastructure is one of the fastest changing areas of technology, so the above is only a sketch of some of the differences between NAS and SAN.  A third option falls within the world of iSCSI SAN solutions, but that is out of the scope of this post.

In Storage Virtualization For Small Business, we privide a specific example of how different storage implementations can have an impact downstream.  As with all things in Information Technology, the best approach is to start with the needs of the business and map technology into those, but it is useful to have a broad understanding of some of the options and trade-offs.  What are your information infrastructure needs?