Let's look at a simplified view of VDI and Session Virtualization to begin with from a use case perspective to see which technology is best suited for which business need. 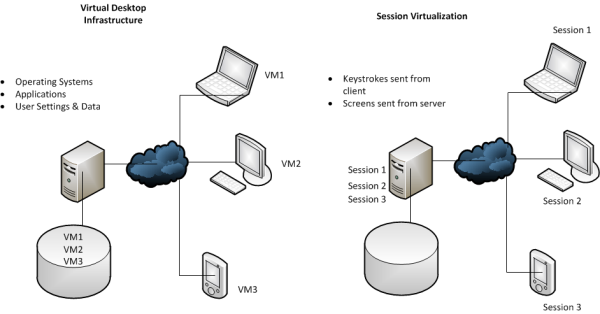 VDI provides the ability to store full virtual machines, including the operating system, applications and user data, on a server which may be accessed by multiple client devices.  This deployment is particularly useful for providing a fully capable desktop environment on a client device which is not supplied by the company (for example, for contractors).  It may also be useful for remote offices or for regulatory reasons since all control of the virtual machines may be handled centrally.  The cost for VDI is higher than session virtualization because the resources to store, send and operate all of the virtual machines is significantly higher than a session-based approach.

In session virtualization, users access a centralized installation of a desktop by sending keystrokes to and receiving screen shots from a server.  This deployment requires far fewer resources than VDI, but does not typically allow users to install their own applications, personalize their environments or have administrative rights.  As such, it is best suited to those employees who have relatively simple application and configuration requirements.  Quest estimates session virtualization to be 25% the price of VDI!