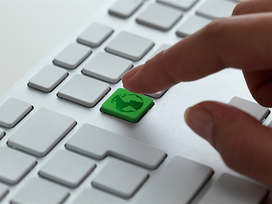 Server virtualization for small business can reduce power and cooling by 75% if you are able to consolidate four servers into one, which is a typical result.  Not only will this save hundreds of dollars per month, but it reduces the amount of emissions of pollutants and greenhouse gases to the environment, according to the EPA.  This is because "Most of the electricity in the United States is generated from fossil fuels..."

Like server virtualization, storage virtualization for small business can have a significant impact on reduced power and cooling through consolidation.  This is because companies can pool storage rather than over allocating storage for individual applications.

Endpoint or operating system virtualization makes possible thin clients rather than traditional PCs by using Remote Desktop Services connected to terminal servers.   A thin client can use one third power less than traditional PCs.  They also generate less heat, have less electronic waste due to fewer parts and are simpler to manufacture which further reduce environmental impact.  All of this may have cost advantages for small businesses if thin clients fit the requirements of end-users.

According to Today's Facility cooling, switching and the like are among the largest power requirements in data centers.  It is for this reason that everything from memory to servers to PCs and displays are being produced with improved power savings in mind.  HP has done a lot of work in this area by regulating CPU clock speed based on workload intensity to producing high efficiency power supplies and intelligent fan controls.

Many small businesses are considering moving to Windows 7 because Microsoft has ended Mainstream support for Windows XP.  Another incentive for migration is improved power management in Windows 7.  In this very interesting blog post, one IT professional measured Windows XP consuming 41.1W in sleep mode as compared to 1.7W with Windows 7!  In the second post, he estimated that he would save his organization 25% in power by migrating to Windows 7.  Whether these results apply to a given small business or not, there are many power savings features in Windows 7 that will help both the bottom line and the environment.