IT Infrastructure Investment: Why Things Don’t Work Out of the Box 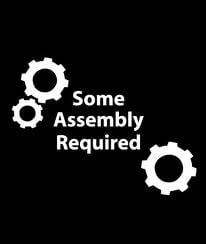 “Assembly required” is always a nerve wracking statement when we are making a purchase. Exactly how much assembly are we talking about here? It is hard to tell whether there are two pieces or 200 pieces to assemble, until the package is home and fully unwrapped. Even in circumstances in which an item comes fully intact, it is rare when anything is fully functional straight out of the box. As much as we would like to believe that commodity items should simply work, they don’t. It is a difference in expectations, which can be frustrating to say the least. When considering ways to improve IT infrastructure, any "assembly required" can be costly.

Recently I changed my personal Internet service from one Internet service provider (ISP) to another. The provider I initially used worked fine, but the new provider promised significant savings and functionality. However, I failed to take into the account the complexities of the IT system. Internet service may exist as a commodity, but there is an entire series of moving parts that exist as a part of the entire assembly in an infrastructure. It is not the items themselves, but the interaction with all the necessary parts, that causes problems.

I expected my new Internet service to simply work, without any stress or effort on my part. The technician installed a cable modem, removed the router from my previous Internet service, and with a quick check of the signal, informed me that everything was up and running. Regrettably, I did not have all of the necessary parts to gain the results I was looking for, and the implementation of the technology was much more difficult than expected. My previous ISP included wireless service, while the current ISP did not. This meant that I needed a wireless router. I also needed to connect everything on my network, including an Apple Time Capsule and a storage device. This was not the most difficult of tasks, but the configurations were definitely tedious.

Increased functionality and low prices came at a true IT cost. If this had been a company, all of my employees would have had to reconfigure their systems, it would have caused risk to the business, it would have impeded revenue growth and it would have incurred additional costs if someone had to be hired to correct the deficiency. The complexities of technology can easily create a downstream effect if we are not prepared to handle all the interactions.

The new Internet provider I obtained was only one part of the total assembly needed for full IT performance. Although I had the core resource, my infrastructure did not work the same as it had before. They provided the parts, but not the preferred results: a common theme within the IT services market. My new ISP clearly had a different definition of success than I did, and this lack of service is exactly why things don’t work out of the box.

The ramification of this kind of investment on a small business can be catastrophically expensive. Before deciding a service or infrastructure update will benefit your business, it is important to investigate the overall cost to your company in being able to use your investment and the cost of getting there.